MOVIESTACK
The Lord of the Rings: The Return of the King (2003)

I don't get it. Throughout the trilogy there are at least(as I can think of) three characters with magical powers: Gandalf, Sauroman and the Witch King. Gandalf for starters takes on the big Balrog with lightning strikes of some sort, but afterwards(when he's gotten more powerful) he just uses a light beam to scare away the Nazguls. Why doesn't use his magic in the big battles instead of just throwing around his staff and sword?

Then there is Sauroman who in the deleted scene in the third film, casts some sort of fireball at Gandalf. Why didn't he do that when the Ents came an attacked Isengard instead of just staying in his tower looking confused? They were clearly very susceptible to fire damage, so it would obviously have helped a bit.

Then finally the Witch King. In the third movie he completely obliterates Gandalf's staff, which at least makes it seem like he has some sort of destructive magical powers. Why doesn't he use it more often? Another thing with the Witch King i was wondering about, is if that whole "No man can kill me" was meant to be taken litteraly, and his only weakness was a woman, or if it was just some female-power joke meant to taunt him.

I like the movies very much but I've always wondered about these things. I am although certain that there is some clarification in the books so if anyone has read them, please do share.

All of his real power comes from his staff which broke the ground when the Balrog was on the edge of the Bridge of Khazad-dûm, Gandalf could do little to stop the forces of Isnegard by this staff.

Gandalf might have used his special ring called the Ring of Fire (Narya) on Saruman in The Two Towers, Gandalf cannot take on The Witchking, The Witchking destroyed Gandalf's staff in seconds because his power comes from Sauron, He is the most powerful. 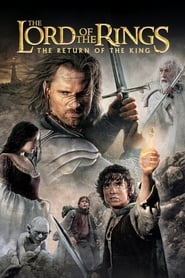 The Lord of the Rings: The Retur...

Aragorn is revealed as the heir to the ancient kings as he, Gandalf and the other members of the broken fellowship struggle to ...